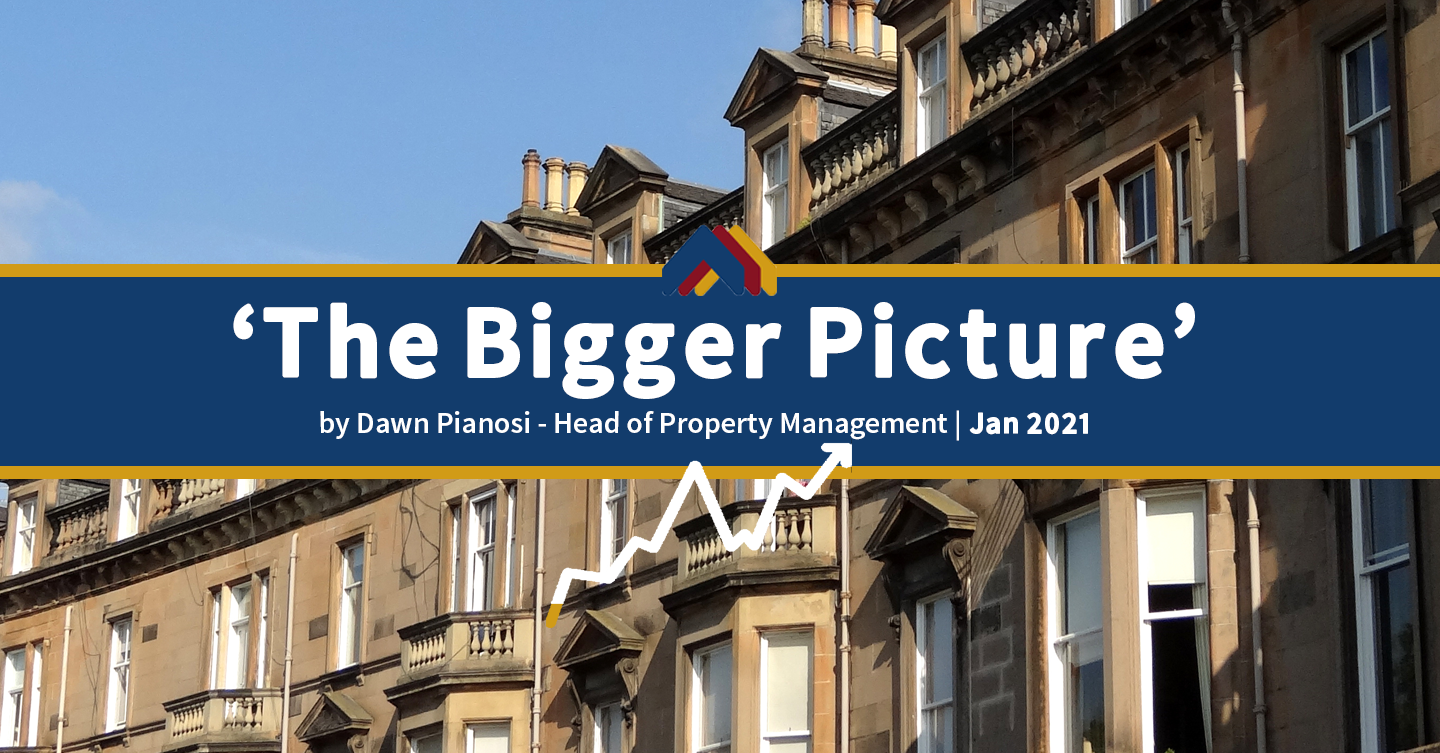 Welcome to the first of our monthly blogs – by Dawn Pianosi, Head of Property Management

Firstly, allow me to wish you a belated Happy New Year from the entire team here at Cullen Property.  I’ve been holding off doing a ‘state of affairs’ style update to kick off the year as it was unclear what the impact might be of the return to a more aggressive lockdown.

The restrictions announced on 4th January, being similar to those experienced last March, made me fearful of a potential second flurry of tenant notices from our HMO portfolio, as students may have given up on any hope of on-campus normalcy for the remainder of the academic year.  The end of the first week of January passed, as did the second and although we received a trickle of notices, the outlook became more optimistic.  It still felt too early to make conclusions though given Edinburgh University had yet to make any significant statements about alterations to its projected phased return.

That announcement came last Thursday afternoon, when they emailed all students to advise that with stark few exceptions, learning would be on-line only for the rest of the semester.  The weekend now having passed, we reviewed the weekend’s emails and touch wood, it would appear we only have one further HMO notice to leave in the process of being confirmed.

The impact on tenant occupancy in the HMOs therefore, appears less severe than expected.  At the time of writing we have 22 HMO properties on the market, 8 of which have potential tenancies in application stage with entry dates between now and mid-February.  A number of these were the result of notices given mid-December, so it would seem that any students who didn’t wish to see out a second semester away from home while learning digitally, took the decision to leave the city in line with the end of semester 1.   While it is many more HMO properties than we’d ordinarily be trying to fill in the winter months, we are seeing applications coming in, often from a mix of students and professionals, as people opt to live in groups rather than alone or with family at this time.

We have seen a good number of requests for lowered rents in the HMO tenancies as students suffer the closure of the businesses that traditionally provide part time employment and their parents/guarantors may also be dealing with furlough or redundancy.  I cannot commend highly enough the landlords who have gallantly sacrificed a portion of rent to help tenants remain in their tenancies through the next few months.

Of the non-HMO properties, we have applications ongoing for 4 out of 14 available properties.  Changes in restriction levels throughout 2020 would depress enquiry levels for around 2-3 weeks according to Zoopla, before enquiry levels would return to or slightly exceed seasonal norms.  Rent levels do tend to drop normally for lets achieved at this time of year as stock outweighs demand for a few months.  This dip usually resolves by March.  The rent depression appears to be more considerable this winter as professionals seem less willing to pay a premium on city centre properties which place them close to the presently closed eateries, entertainment and work spaces, and which tend toward limited green space.

The market overall for Edinburgh remains delicate.  Some HMO properties may well become vacant in late April rather than the usual late May, and without the usual summer attractions and jobs, it may be a challenge to source applicants willing to pay full rent again before students return ahead of the next session.  However, ‘rent offers’ may encourage earlier take-up, particularly if the Universities are able to confirm full opening in September early in the summer.  Therefore, it would be prudent for landlords to factor a potential void into their financial planning for this year.

There is light at the end of the tunnel though in the ongoing roll out of vaccines.  I think we all realise the logistical challenges of the project and that there was going to be no magic wand on 31st December 2020, but it is my every hope that when we close out the summer, life (and tenancy cycles) will return to a better semblance of normal: changed forever, possibly, but less precarious.

My pension provider wrote to me this month with an annual statement.  It wasn’t terribly positive reading unsurprisingly.  They included with it a flyer basically explaining that in the life cycle of a pension plan, there will be dips and recoveries and that pandemics aside, the current situation was nothing to panic about and pensions are still sensible long-term investments.  My resounding thought at the time was that it would bring little comfort to people retiring presently, but actually, for our market, it’s a very important point to hold on to.  Property is a long-term investment.   The value of the asset steadily increasing over time is as important as the rent income.  In Edinburgh, for the whole of 2020, the average property selling price was up 4% on the previous year (ESPC).

Considering rents, there are likely ongoing challenges ahead for 2021, but we can perhaps take comfort from the data which demonstrates that through the 2008 recession, Edinburgh’s downturn in rent levels was limited to a year and it exceeded its previous position much sooner and more steadily that counterparts across Scotland and the UK.

Edinburgh is a great place to live, and people need homes to live in.  So, for all that I can’t give you assurances that 2021 will bring strong yields and seamless transition of tenancies, I urge you to take comfort in the bigger picture.  This too shall pass. 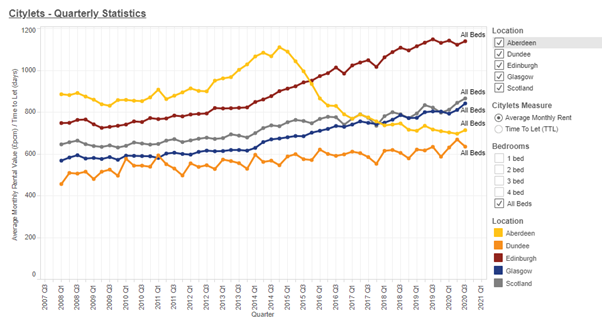